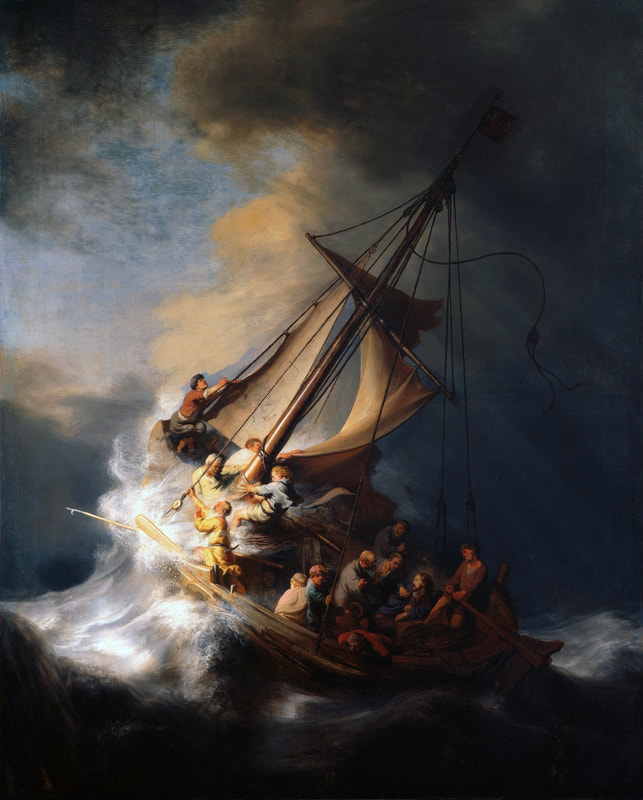 The Sea is Stilled

On the same day, when evening had come, He said to them, “Let us cross over to the other side.” Now when they had left the multitude, they took Him along in the boat as He was. And other little boats were also with Him. And a great windstorm arose, and the waves beat into the boat, so that it was already filling. But He was in the stern, asleep on a pillow. And they awoke Him and said to Him, “Teacher, do You not care that we are perishing?”
​Then He arose and rebuked the wind, and said to the sea, “Peace, be still!” And the wind ceased and there was a great calm. But He said to them, “Why are you so fearful? How is it that you have no faith?” And they feared exceedingly, and said to one another, “Who can this be, that even the wind and the sea obey Him!”

Boats were a common sight on the Lake of Gennesaret, better known as the Sea of Galilee. Fishermen at work as well as goods and people being ferried over its water was all part of daily life. So when Jesus requested His disciples that they go across the sea to the ‘other side’ the experienced fishermen among them would have considered it no more than an ordinary routine boat journey. They were in for a surprise.

For most of us life is ordinary and routine. We live out our lives each day working, eating and sleeping as well as enjoying some leisure time. But have you ever considered that your life is really a journey? A journey travelled across ‘the sea of time’ ever in a forward direction to a destination that could be appropriately called ‘the other side.’ Sometimes when we think of places far away from where we are, we talk about ‘the other side of the world,’  but the other side to which we are all going is not some far away destination in this world, but our ultimate destination in the next – eternity, the ‘world’ where our souls and spirits will dwell. Life’s journey ends in ‘the harbour of death’ and when we ‘disembark’ at the ‘other side’ it will be for one of two possible destinations – heaven or hell. Which it is will depend on how I have responded to the gospel.

A storm on the Sea of Galilee to experienced fishermen was hardly a surprise, but the scale and intensity of this storm on this day seems to be different. It was so furious they thought they were going to perish in the water that is, all expect Jesus. He was asleep at the rear of the boat on a cushion! We read the disciples had ‘took Him along in the boat as He was’ that is, just as they found Him, evidently tired and weary after a long and intense day of labour. This was an opportunity for Jesus to get some rest in the midst of a life so busy. Such was the peace in His heart and the calm of His mind He could not only restfully sleep on this boat, but through this storm as well. Sleep is a necessary privilege in human experience as we all know too well.

The disciples were overwhelmed by this wind storm and in fear for their very lives as the boat was continuing to fill with water. Not a good situation. As is the case when fear takes hold of our minds, they became desperate and in their distress were alarmed to see Christ soundly sleeping through it all. With fear driven excitement they awoke Him and with stinging words rebuked Him – “Teacher, do You not care that we are perishing?” Which sounds like why are you sleeping? Don’t you realize we are all about to drown? Yes including Him! There was both rebuke as well as disappointment in their words. As fear arose in their hearts, faith diminished. The issue for them was the Lord’s seeming lack of care. They were desperate and yet He remained seemingly unaware, inactive and unconcerned as He slept soundly. Whatever they thought He could do, they evidently didn’t expect Him to calm the storm as their subsequent reaction shows. Presumably it never occurred to them in their panic that He had power over nature as well as disease. This is where they were wrong. Their faith was so limited concerning Him. To see Him go through the storm with them was as significant and seeing Him calm the storm for them! They should have known that there was no possibility that the hope of the Messianic kingdom would sink to the bottom of the Sea of Galilee along with their Master.

Unawakened by the storm, He does respond to His disciples need. Remarkably, just as He had rebuked unclean spirits He now rebukes the wind and with a command says to the sea, “Peace, be still!” (KJV). Perhaps there was another power operating behind this storm other than the forces of nature? Immediately the wind stopped and the water became instantaneously calm there and then, not an hour later. We can understand how this would have been surreal to the minds of the disciples. The miracle by the power of His word was that the storm not only stopped, but that a great calm was experienced right away. Well might the disciples exclaim with heightened awe: “Who can this be, that even the wind and the sea obey Him!” They lacked courage in the storm, now they were overawed by the calm. But, as well as rebuking the wind, Jesus rebuked the disciples for their fear and lack of faith in Him. Did they really think He didn’t care or that He would let them perish?

This story demonstrates not only the power of Jesus, but it confirms His identity. “Who can this be, that even the wind and the sea obey Him?” This can only be the Creator who made the wind and sea. This can only be a man who is no less than God. The wonder of the gospel is that the Son of God came to earth as man to live among us as well as finally to die for our sins on the Cross and rise again from the dead for our justification. God is neither far away nor unknowable. He is very close, very real and very relevant. He has come near to us in His Son, the Lord Jesus Christ and He will come near to all who call upon that Name.
Make sure Jesus is on board your ‘vessel’ for not only will He be with you when the storms come in your life, He will most certainly get you safely to the ‘other side’ and land you on heaven’s shore. For this to happen you need to make Him your Lord and Saviour now. You will never regret doing so.