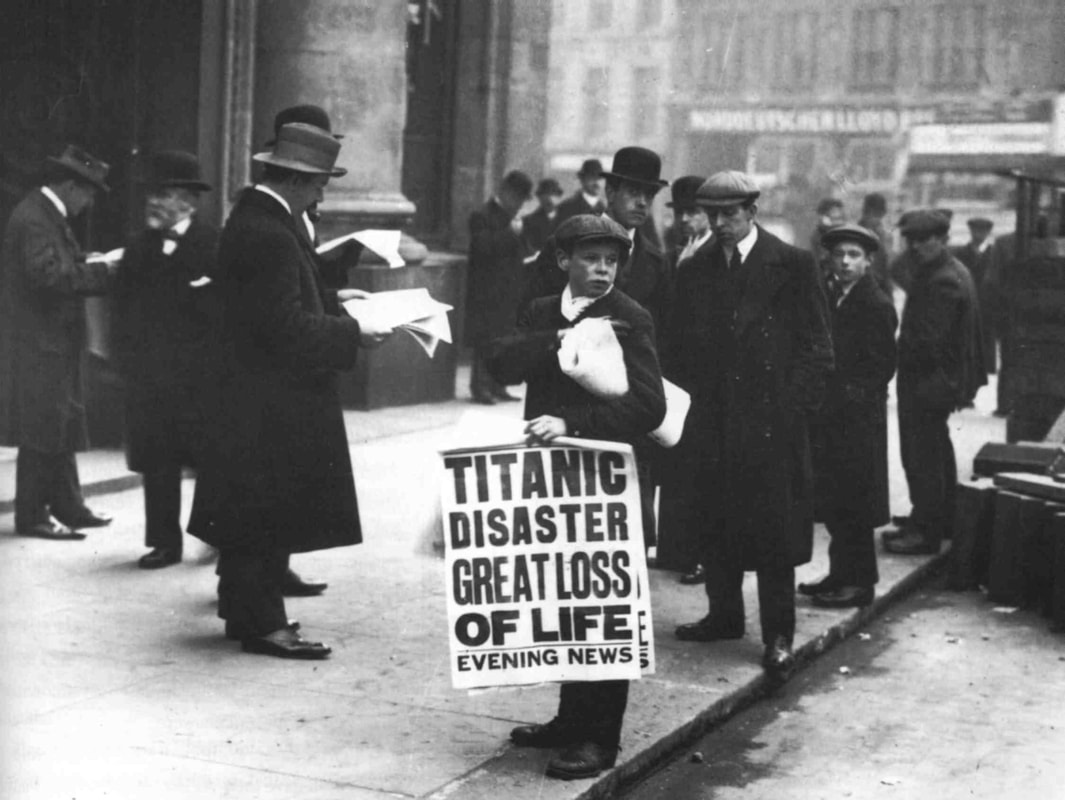 The story of the Titanic continues to hold a fascination for every generation. Belfast Northern Ireland where the luxury liner was built is home to the award winning Visitor Centre, Titanic Belfast. People come from all over the world to learn the story of the ship that was deemed by some as ‘unsinkable’.

Launched from Harland & Wolff’s Belfast shipyard in May 31st 1911 she was in her time not only the largest sea going vessel, but also the largest man-made object ever to move! Her length was 822 ft. 9 in. with a gross tonnage of 46,328. Luxuriously fitted out, its spectacular forward grand staircase covered with a glass dome and descending downwards for five levels represented the ornate grandeur of the ship’s interior.

Sailing on April 10th 1912 from Southampton for New York via Cherbourg France and Queenstown Ireland the Titanic carried its wealthy patrons and other classes of passengers as well as mountains of food which included 75,000 lbs of meat and 37.5 tonnes of potatoes. Powered by its powerful engines and gigantic boilers, this man made titan of the sea under the command of Captain Edward J. Smith, hoisted the American flag at 1:30pm on April 11th and left behind the shores of the emerald isle for New York.

But the Titanic had flaws which were to prove fatal on its maiden voyage not least of which was the lack of sufficient lifeboats. In the original plans, Alexander Carlisle, who was succeeded by Thomas Andrews after retirement in 1910, planned for 64 lifeboats, enough to save all passengers and crew in an emergency situation. However, at the insistence of those in charge at the White Star Line, space for a larger promenade took precedent over the potential safety of the passengers and in the end only 16 were installed, totally insufficient for the approximate 2,229 people on board. Also, despite the 16 compartments of the hull being divided by 15 watertight bulkheads designed so the ship could survive an impact and keep afloat even if two of those compartments completely flooded, the Titanic proved totally inadequate to cope with the type of damage she experienced when colliding with the iceberg on that fateful night of Sunday, April 14th 1912.

The days before April 14th warnings of ice from other ships were transmitted to the Titanic and on that Sunday seven warnings reached the wireless room. The captain and officers were aware of the danger. The final warning came from Cyril Evans of the Californian at 11pm, yet Jack Phillips, Titanic’s senior wireless operator, it seems, rudely cut Evans off before he could give his location and ignored the message because he was preoccupied with sending and receiving passengers’ messages via the Cape Race station Newfoundland.

Together nature and human failure conspired against the Titanic. It seems incredible now that such a massive ship with so many passengers in the prevailing weather conditions of a dark, calm and cold moonless night when visibility was poor, would sail full speed through an area of icebergs depending on the eyes of its lookouts to warn of any imminent danger. In the crow’s nest some 50ft above the front deck of the ship on watch were Fred Fleet and Reginald Lee. Peering into the darkness they saw a haze of mist ahead about 11:30pm, but lacking binoculars which had went missing from the crow’s nest before arriving at Queenstown, they could not see or discern anything definite with their naked eye. Then, at 11:40pm Fred Fleet saw a dark object straight ahead. He immediately rang the brass bell above him and called the bridge. When Sixth Officer James Moody picked up the phone, Fleet reported a fact that would prove fatal to the Titanic, “Iceberg right ahead”. This warning came too late for the ship was moving too fast and the iceberg was already too close to be avoided. Despite immediate action to avert disaster, the starboard side of the ship below the waterline collided with that unforgivable mountain of ice along a 300ft stretch of the hull breaching the first five watertight compartments and allowing the water to pour in. The ship was immediately doomed and tragically so were most of the passengers and crew. In just over two hours from impact that giant of human ingenuity and brilliance disappeared beneath the surface of the icy waters of the North Atlantic.

While there is dispute and doubt about the exact numbers on the Titanic, just over 700 were rescued out of the approximately 2,229 people aboard. That means over 1500 lost their lives on that fearful and tragic night.

Anytime I read or reference the story of the Titanic I am left with a sense of deep sadness. I think most people feel the same way. Yet, it’s obvious why the story continues to captivate each new generation. It’s a story of glory and tragedy. As you consider what happened and how the end unfolded you are both moved and mesmerized. Sensing the shock, fear and dread of crew and passengers as well as realizing the courage and self-sacrifice of many evoke our sympathy and admiration. And you wonder, how would I have reacted had I been there?

Despite the many warnings received by the Titanic concerning the danger of icebergs ahead they sailed on full speed regardless depending on the eyes of the lookouts in the crow’s nest to alert the officers of any immediate danger. But on that moonless still night when Fred Fleet finally saw the dark outline of that mountain of ice it was already too late. So it is with the world. Like the Titanic, it’s heading ‘full speed’ for a tragic destiny. Despite the many warnings that divine judgment lies ahead, it continues to keep its present course of wilful rebellion against God. According to the Bible, humanity is heading for a collision with the Almighty. We are moving full speed toward the immovable ‘iceberg’ of divine wrath. Sadly, most people don’t believe it and when the ‘impact’ happens and the reality of God’s judgment is realized, it will be too late.

During the afternoon of April 11th after leaving the shores of Ireland and in the three days that followed the Titanic sailed through the calm waters of the Atlantic with a canopy of blue skies above her. All seemed well. But I wonder did any of the passengers as they walked the second class ‘boat deck’ take much notice of the lifeboats or give much thought to the possibility of any or all of them ever being needed. Amid the confusion on that fateful night, some were lowered with too many empty spaces and Number 7 lifeboat on the starboard side went down with only 28 people instead of its capacity of 65. God’s ‘lifeboat’ is Christ. He is the only way we will be rescued from the ‘sinking ship’ of this world and only He has the capacity and sufficiency to save all who put their trust in Him.

Pictures from the time of the Titanic tell its story. In the aftermath, one of a newsboy, Ned Parfett, selling newspapers outside the White Star Line Offices in London the day after the tragedy, April 16th, says it all. He is holding in his hand the Evening News headline of six words – ‘TITANIC DISASTER GREAT LOSS OF LIFE’.
Loss of life in such circumstances was absolutely tragic, but the greatest tragedy of all for anyone no matter how or when we leave this world, is the loss of my soul. Jesus said: “For what will it profit a man if he gains the whole world, and loses his own soul? Or what will a man give in exchange for his soul?” – Mark 8 vs 36 & 37.